A CHEERLEADER, sacked for being too sexy, sent vile messages to her fraudster boyfriend encouraging him to rip-off pensioners to fund her extravagant shopping habits, a court heard.

Rebecca Batchelor, 21, sent messages to Anis Ben-Sghaier, 25, encouraging his vile actions so he could splurge on a luxury lifestyle and put a down payment on a Range Rover Sport.

She denied getting money from the fraud but she admitted one count of converting criminal property after explosive Whatsapp exchanges were read out in the court.

She messaged Ben-Sghaier “Woooooo, shopping time. Omg hahahaa I am joking” after being told one victim had been conned out of £5,000.

In another horrible exchange, the model asked: “Is Dot paying today?”

The Sun told how Millionaire boss Glenn Tamplin fired them after some dancers tried to pull the players — who include former Premier League aces Jermaine Pennant, Jamie O’Hara and Paul Konchesky. 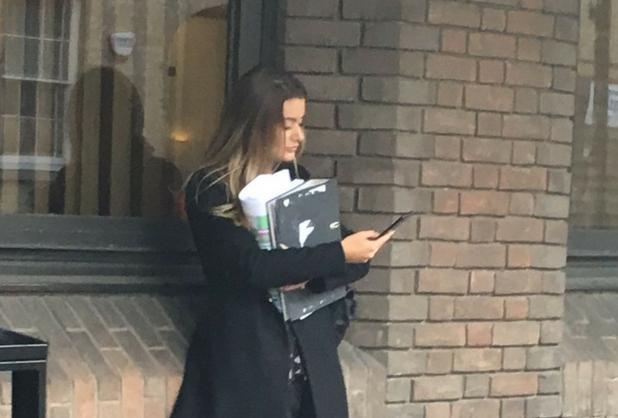 Rebecca Batchelor is on trial at Chelmsford Crown Court, pictured outside, accused of receiving the proceeds of fraud. IMAGE: BPM MEDIA

Bu last month he reinstated the pom-pom twirlers after a fan backlash and they were hailed the club’s “lucky charm” after a surprise win.

She also helped draft a letter encouraging victims to invest in useless carbon credits and even used a stolen credit card to splurge on shopping trips and spent a whopping £517 on a London lunch.

Batchelor told cops she was aware of the fraud but claimed she had told her boyfriend to stop when she was arrested.

She tearfully told DC Rebecca Jackson: “When I started seeing him I just got suspicious of what he did.”

And when Batchelor asked him he said “he rings people and sells them stuff that didn’t exist”.

His brother, Bilal, 22, and an ex girlfriend, Cathreen Welch, 23, are also on trial for profiting from the sick scam. They deny the charges.

Batchelor, arrested with the others in January last year, told cops she started dating Anis a year earlier and claimed she grew suspicious of his dealings and that he later admitted he was defrauding people out of their money.

She also told officers that she had allowed her ex to use her bank account to receive payments as she believed he did not have one of his own, the court heard.

Welch admitted to police that when she went out with Anis she allowed him access to her accounts so he could pay the rent on their flat but denied knowing anything about a fraud.