A Siberian tiger attacked a young female zookeeper in front of shocked visitors in Russia. The big cat pounced on the woman as she brought food to the animal – but her life was saved by onlookers who shouted and threw things at the beast.

Men even lifted a table and chairs from a nearby cafe, hurling them over the fence to distract the 15-year-old male called Taifun, or Typhoon.

The unnamed woman, from Kaliningrad, was badly mauled but was rushed to hospital is expected to survive.

Dramatic pictures show the woman on her back on the ground with the tiger on top of her seemingly going for the kill.

The woman can be seen screaming in terror as the animal – which had never attacked a keeper before – swipes at her with its paws. 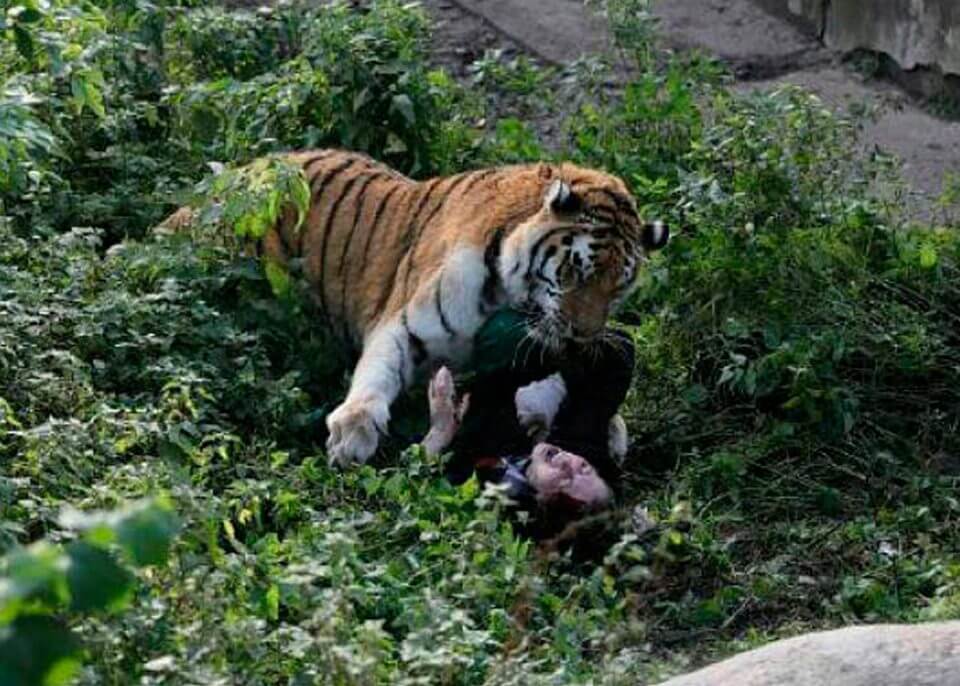 But thanks to the quick-thinking bystanders who distracted the deadly predator, the woman was able to get up and run to safety.

One witness said: “The girl’s face was bleeding – she screamed and tried to fight off the animal.”

Other zoo employees were not present at the moment of the attack, and it was left to visitors to save the keeper.

The Siberian tiger – the largest species of cat in the world – was supposed to be contained in another part of its compound when the woman brought its food.

But there was clearly a problem and the cat – described as “elderly” – was able to attack.

A spokesman for the zoo said: “The animal entered the enclosure when the keeper was there.

“The tiger attacked the human.

“Visitors with their shouting, stones and other improvisation managed to distract the animal.

“This allowed the zoo employee to hide in a back room.”

Later zoo staff later arrived at the scene and shot a sedative into the tiger.

A local health ministry spokesman said: “The patient was delivered to the hospital with multiple wounds to the body and limbs.

“She is conscious – her condition is assessed as stable but critical.

“There is no threat to her life.”

The woman is in intensive care at a hospital in Kaliningrad, a Russian region wedged between the EU countries of Poland and Lithuania.

A criminal probe has been opened.

The Siberian tiger was born on July 1, 2001 in Chelyabinsk Zoo but was later moved to Kaliningrad Zoo.

Tigers have a life expectancy of 15 years in the wild.

A source said: “Typhoon has never before shown any aggression to zoo staff.”

But today the animal was “bad tempered” and “aggressive”, the source added.