A drunk recruitment boss left two men seriously injured she she attacked them with a broken wine glass ‘to teach them a lesson’.

Lynn Tonks, 50, from Bristol, said one of the men had given her a ‘dirty look’ in the city’s New Moon pub.

The Blue Arrows recruitment manager walked up to victim Simon Dove and slapped him in the face.

Both men decided to leave the pub to avoid further confrontation, but Tonks poured her wine out on the floor and followed the men out with her glass hidden in her jacket pocket.

Outside the pub she smashed the glass off the face of Ashley Williams, leaving him with blood pouring out. 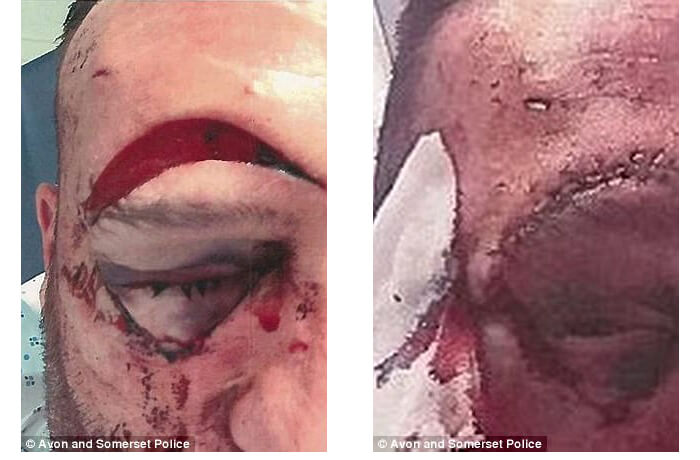 She used the stem of the glass to hit Mr Dove – cracking his eye socket and leaving him with a large gash, containing fragments of his bone

And then she used the stem of the glass to hit Mr Dove – cracking his eye socket and leaving him with a large gash, containing fragments of his bone.

According to the Bristol Post, Tonks told witnesses at a bus stop: ‘I’m 50 years of age, I don’t need this s**t.

‘You don’t know the half of it, he punched me in the pub.’

Tonks denied the offences but was found guilty and jailed for three years at Bristol Crown Court.

Tabitha Macfarlane, defending, told the court: ‘It was a surreal night and she struggles to understand why she reacted in the way that she did.’

Following the case, Detective Constable Haley Matthews said: ‘The fact Tonks was intoxicated was no excuse for the level of violence she used against her victims.

‘In using a glass as a weapon, she not only inflicted significant injuries but she also left her victims with permanent scars, which they now have to live with every day.

‘Offences of this nature will not be tolerated and we will always do everything in our power to bring those responsible to justice.’