Racist graffiti has emerged on a wall in Birmingham that suggests white people aren’t welcome to the area.

The writing says ‘no whites allowed after 8am’ and it appeared in the inner-city neighbourhood of Alum Rock.

It appeared on August 13 and attempts have been made to cover the word ‘whites’, but it was still partially visible yesterday.

The original post on Brumz Updates said: ‘This is Birmingham, not South Africa. It don’t matter if you’re brown, black, white or fucking green, just no need for it – you always get one idiot regardless of their skin colour trying to cause divide for others.’ 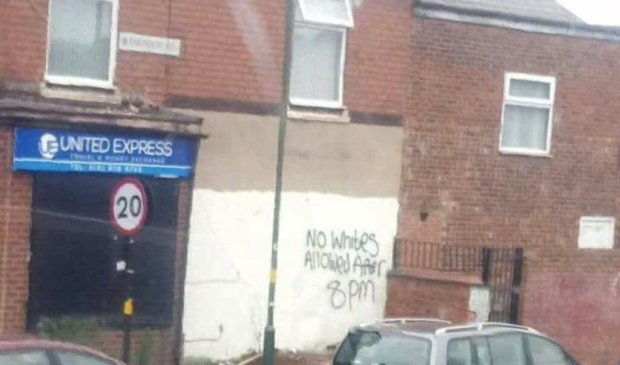 ‘Whoever has done this needs to know that they do not have any support from the local community.’ (Picture: Birmingham Mail)
Read more: http://metro.co.uk/2017/08/17/no-whites-allowed-graffiti-daubed-on-wall-in-birmingham-suburb-6858076/#ixzz4q059NLuS

Shelagh Cannon commented on an image posted online saying: ‘It’s a sad truth that these Ghettos are probably here to stay. Lots of new people in the country who have absolutely no intention of integrating. Very sad!’

He told the Birmingham Mail: ‘Whoever has done this needs to know that they do not have any support from the local community.

‘It is unacceptable to have such divisive signs in a diverse community like Washwood Heath which embraces people of all colour and walks of life.

‘We cannot allow people to get away with this. They are trying to foment trouble in our peaceful neighbourhoods.

‘The community here has strong bonds and together we need to remain vigilant and root out the racists amongst us.’