A cafe has invoked the fury of parents after banning all children under the age of 12.

Bob Higginson, 61, only opened his ocean liner-themed cafe The Chart Room around a month ago in Brixham, Devon.

After opening, he quickly announced that while dogs and older children were welcome, kids younger than 12 ‘would not be catered for’.

Since then he has faced calls for a boycott from angry residents, who claim it’s a form of discrimination.

‘I wanted people to be able to come and discuss the old days and have a nostalgic chat without children running around and distracting them.’

He added that children break things, whereas dogs often do not.

‘There are nice and expensive artefacts around which are not behind glass cases like they would be in a museum, and we’ve had things broken by children in the past,’ he continued.

‘Yes, we welcome dogs. A lot of people have assistance dogs or pets they bring with them, and they don’t jump around taking things off the tables.

‘I’ve never had a badly-behaved dog come in.’

However, resident Wendy Moore is calling for people to boycott the Chart Room in protest. 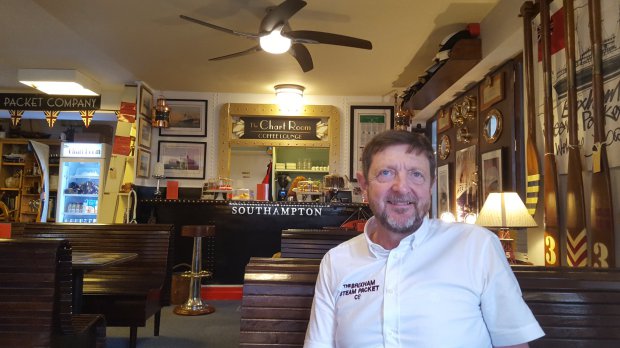 The cafe has a lot of old artefacts in that Bob is worried children will break (Picture: SWNS)

‘Who on earth does Bob Higginson think he is?’ she said. ‘Would he ban disabled people from entering his premises? Or people of a particular race or colour or religion? I’ll bet my bottom dollar he wouldn’t.

‘Or how about the elderly? Ban them as well, would he? No, he wouldn’t – that would be ageism. So how come he thinks it’s OK to ban children of a certain age? This is blatant discrimination.’

Lee Knight added: ‘I’d rather go to a place full of happy, loud kids running about than some dark, quiet, miserable building with everyone sitting about moaning and sipping tea, but that’s just my choice.’

But Bob did enjoy some support from locals.

Sharon Taylor said: ‘If parents would exert better control of their children, it wouldn’t be necessary. However parents seem to be afraid of controlling their children. His business… His rules!’

A Torbay Council spokesman said: ‘Whether or not children (under 18s) are permitted on a premises is not legislated.

‘Therefore, there would be no direction from the council as to whether a business can or cannot permit entry to children.

‘This would be a matter totally at the discretion of the premises licence holder or if not licensed then the business/premises owner.’